I’ve developed an enthusiasm recently for stone balancing. Not for doing it myself—I haven’t remotely got the dexterity or the patience—but for photos and videos of rocks stacked on top of one another in impossible ways (there are videos all over YouTube, and pictures all over the internet). The connections to thinking about stratigraphy and about the Anthropocene are easy to see: scrupulous attention to rocks arranged in vertical layers; the anamnesic quality of stone, or the way it can turn out to hold within itself improbable forms, like fossils; the delicate connection between human intention and mineral solidity, attuned to the possibility of disaster; stone, sheerly, the mesmeric draw of the lithic celebrated by Jeffery Jerome Cohen.

Chronostratigraphic units (like the Quaternary system or the Anthropocene series—that is, the rock groups themselves, not the time in which they were laid down) are also known as “time-rock” units. Time-rock units: a perfect way to describe groups of stones fleetingly perched atop one another.

Until recently I’d associated the stacking and photographing of stones mostly with Andy Goldsworthy, the master. Many stone balancers do quite rightly describe themselves as artists, and their creations as sculpture (or in Peter Juhl’s word, “temporarysculpture”). But I’m finding myself particularly taken with rock balancing strategies that treat it as a determinedly populist kind of art, if as art at all, and if as a kind of Zennish meditation, then as one aimed at relaxation more than insight. Or best of all, rock balancing as a hobby or an outdoorsy pastime, like magic tricks or fishing. I appreciate the fact that the TV clips you find of rock balancing tend to be wondrous little episodes taken from undemanding teatime magazine programmes like Countryfile and The One Show. I like the childlike quality of it all, as with a firework display. (Although I know I’ll never balance a stone with any artistry myself, I was an inveterate stacker of the pepper on top of the salt on top of the matches on top of a coaster on top of a glass when I was little.)

The main tensions held in balance by stacked stones are clear enough. Bulk aspiring towards weightlessness; the robust made briefly fragile; the permanent made ephemeral, or conversely, something hopelessly unstable temporarily stabilised; immobility promising mobility; grace resolved out of something ponderous. The best creations take on a double quality of apparent impossibility and apparent inevitability at once, like a fine glacial erratic.

If stone balances are sculptures, they’re all pedestal. If they’re like minor megaliths, they also imply a world of transient play that must have enormously preceded the construction of the first megalith: hominins’ first architecture, the invention of equilibrium. They don’t need to take any inspiration from pre-existing analogues—they’re experiments in pure form—but they sometimes closely resemble the windblown formations at places like Brimham Rocks, a magical gallery of top-heavy millstone grit outcrops I used to run around as a child.

The visual magic of stone balancing depends first of all on minimising the contact area between one stone and another. Balancers talk about feeling their way in to tiny irregularities in the surface that will allow stones to latch together, and then testing the directions in which the upper stone tries to fall, making increasingly minute corrections until it’s steady and content. (The complexity multiplies, of course, if the upper stone is not upright under its own gravity, but counterbalanced by a third still higher stone.) The more delicate the kiss between the two stones, the greater the craft. To watch a balance being created is to watch the gradual subtraction of human presence from the composition, the balancer’s hands growing almost completely still as the stones find their alignment, until after several apparently motionless seconds it’s possible to step away and leave the arrangement intact. It makes sense for a photograph to follow: just like a photograph, a stone balance arrests the flow of time, conjuring a haunted stillness.

Many stone balancers seem to understand what they do as a kind of environmental art. Their creations don’t require any external materials, and can promptly be disassembled to leave no trace behind. They tend to speak about an appreciation of—or even a communion with—the natural world, and about balancing as fostering a respect for the scene in which their work is created. In particular, they often make reference to the “balance of nature.” I wonder about that. Can the static equilibrium of a stone balance really suggest anything about the dynamic balance of an ecosystem? Don’t these balances have at least as much affinity with death as with life? Even so, the view that a stone balance might be a way in to thinking about other kinds of balance appeals to me. Balancing might, perhaps, have to do also with enframing. A stone balance concretises gravity, and in that way the Earth itself is always a part of the composition. The arrangement’s “base rock” isn’t really the base: the balance always calls out to what the base is itself based on, to the planet in its massiveness.

But generalisations like these can only ever be a way in to the work of individual balancers themselves. Here are three that I like.

Peter Juhl works mainly on the shore of Lake Superior, using lake-rounded stones, spherical, oblate, and ovoid. His arrangements are like good prose, where the supreme skill lies in fostering the impression of effortlessness. He creates the calmest balances I’ve found: tranquil, photogenic forms. He favours symmetry and patterning, stupa-like shapes and playful duplications, shot under bright blue skies. His work is intensely textural. He likes pockmarked, chalky-looking stones that aspire upwards from lichenous base rocks, stretching in the sun. He often works on a very small scale, as if it’s more remarkable to locate the airiness that he’s after in pebbles than in boulders. There’s rarely or never anything man-made in view of his camera. The arrangements are usually framed in close-up, permitting a folksy intimacy. He defaults towards three or four stones at a time, sometimes including daring counterbalances that make his rounded stones cling together whilst appearing asymptotically adrift.

Adrian Gray specialises in craggy, monolithic two-part forms. The upper rock often grips the shoulder of the lower, and both of his rocks tend to seem emphatically heavy. So Gray’s conjunctions rarely look as effortless or as gentle as Juhl’s, but instead permit an undercurrent of strain to be seen, like a gymnast on the rings.  He tends to use stones all of the same kind, as if to imply—against all credibility—that his pieces belong together perfectly naturally in just this arrangement. He emphasises light colours and whorled, ridged, or blocky shapes, or sometimes stones with sharp broken edges that he arranges in parallel with one another. He favours settings in smart, luxurious-looking gardens, and photographs in which houses appear prominently in the background. In other words, Gray is in part a proudly commercial artist, a designer for patrons. His practice includes fixed sculptures, in which he recreates a balance with a permanent join between the stones so as to create a saleable design object. But it also includes constructions on a wilfully vast scale, using a JCB to hoist the upper stone into place in order to build, for instance, a fantastical new tor on Bodmin Moor. 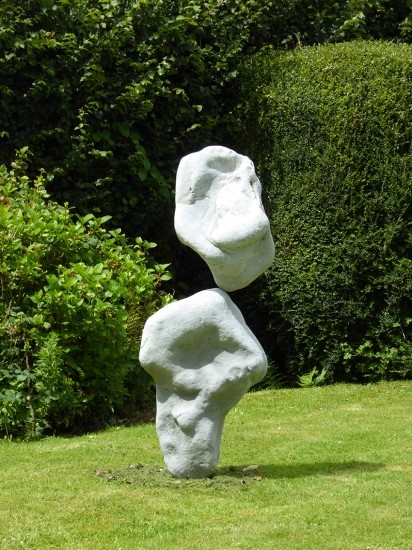 Adrian Gray [no title or date]

Michael Grab is the most kinetic of balancers. He favours clashing colours, curious shapes, an aesthetics of improbability. He travels a lot, and his website categorises his works by the country in which they were made. Videos are an especially important part of his documentation. Many of them end by showing the stones crashing gleefully down, and even when his balances are intact there’s something propulsive about them, a just-suppressed impulse to wriggle free—not like Gray’s sense of mass barely held in check, but more like a child almost unable to sit still. Grab himself tends to appear in his videos, a keyed-up, skaterish figure in tshirt and baseball cap. He likes to multiply small stones balanced face-to-face rather than end-to-end, as incidental frills and flourishes in amongst the main, radically precarious arrangements (Grab’s technical artistry is unsurpassed). Above all, there are streams everywhere in his work. He loves towers and arches that emerge out of running water, so as to heighten the absolute improbability of his balances lasting for more than an instant before resolving back into the fluidity around them. He’ll often splash or drip water over the completed arrangement, making the stones appear glossy and slick. His photos tend to have a shallow depth of field: backgrounds become a luscious blur. 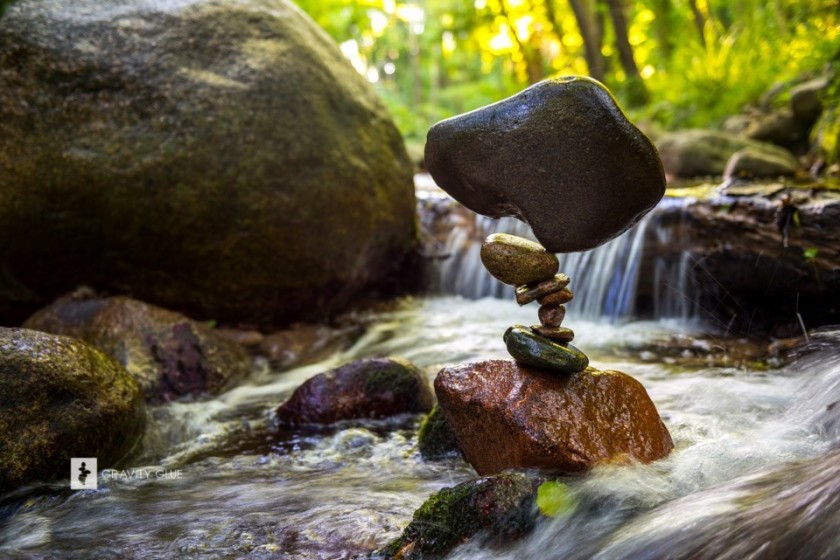 No posts for the next couple of weeks, incidentally.

The close of the Holocene epoch and the birth of the Anthropocene. Ecological politics in the time of the long crisis. Internet opinion-pedlary, keeping tabs on new work in the field. Welcome!

"If we think of ourselves as living in the Anthropocene epoch, we realign our notion of temporal dwelling. … We become members of deep time, along with trilobites and Ediacaran organisms. We gain the gift of de-familiarization, becoming other to ourselves, one expression of the ever-evolving planet." — Don McKay